One of the cries of extinction rebellion has been "Listen to the scientists" but they only want to listen to the diagnosis, when it comes to a cure it does not listen to the scientists. See Jet fuel from thin air: Aviation's hope or hype?
The solution they offer is the same one that has been offered to every generation by some group or other a return to nature, the solution never varies only the problem changes. It is the same snake oil elixir that been offered by The Romantic Movement, the Hippys, Arts and Crafts movement, Conservatives the world over etc etc

One general law of physics is that if you have enough energy you can do just about anything. We have several potential sources of no carbon energy the environment and nuclear fission with a third nuclear fusion under development. The first part of any solution is going to be based on large amounts of power generation, via these sources, we can start building them now, start developing more systems and move first to more electrically based power.
There are of problems with the energy capacity of battery storage. Highlight by this graphic. 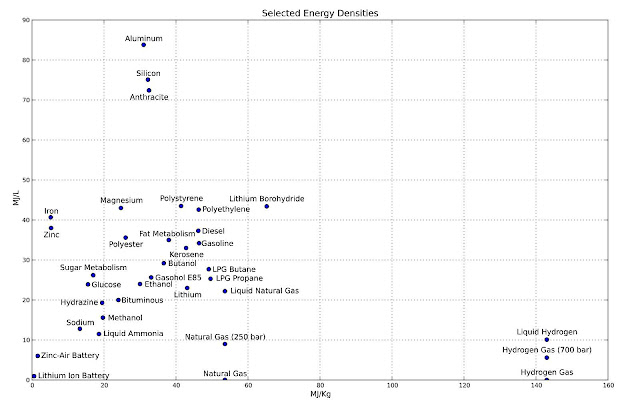 You see that battery storage is down at the bottom left, this is not a good place to be, it means that to store the energy for a long journey or with a heavy load you need a lot of space and mass for the batteries.
Hydrogen, by comparison, is very good at storing energy in terms of mass but very bad in terms of volume only liquid hydrogen, out of the 3 hydrogen storage types,  beats batteries in volume per joule and is way behind diesel, etc. For an aircraft, this creates a problem you have to have big tanks which either add drag or eat into internal space. Liquid hydrogen is also very cold so cold it can freeze liquid oxygen. Liquid methane which can be made from hydrogen via the Sabatier process is not as mass efficient as hydrogen but is better in terms of volume and temperature, both these fuels were tested in the 1980s by the Soviet Union on the Tu-155 and were successful.
We can extract hydrogen from water by electrolysis it is also produced as a by-product of some chemical reactions, it, of course, takes electricity to perform electrolysis. Hydrogen from sunlight is a relatively new technology that can avoid the electrical stage and shows promise of being more efficient than electrolysis from electricity generated by photovoltaics.
To make Methane from hydrogen, via the Sabatier process,  you can use CO2 captured from the atmosphere but it takes energy to both captures the carbon and to convert it. You can also turn that methane into jet fuel or diesel via the Fischer–Tropsch process. The first was discovered in 1897 the later in the 1920s. Fuel advertised as GTL Fuel ultra-low sulphur diesel such as Shell's GTL is made by the Fischer–Tropsch process suggesting that most of the energy cost is in making the methane, as GTL fuel is readily available.
We could simply capture the carbon as CO2 and pump it underground and take the equivalent amount of natural gas. This would make sense if the energy used to capture and convert the CO2 is greater than the cost of extracting and cleaning the natural gas. To improve the levels of CO2 you might be required to pump more CO2 into the ground than extracted as natural gas.
Rather than go through the Sabatier process, the mixture could be made into syngas for the manufacture of plastics. While there are concerns about single-use plastic items, large amounts of plastic are used in items which benefit from the longevity of plastics. Making plastic from atmospheric carbon will lock that carbon up in the insulation of wires, window frames, and household appliances. It can be recycled via thermal depolymerization but that is another subject.
Crude oil is very complex and contains many chemicals which are used in a wide variety of ways which do not add to global warming but if the switch is made to using atmospheric carbon to make some of these product it might still be sensible to extract some crude oil for the more complex ones, but if atmospheric carbon is pumped underground to replace the fossil carbon at a 1:1 rate this would end up reducing atmospheric carbon as a percentage of the carbon from the oil will never enter the atmosphere. Mandating that a greater amount of carbon is pumped into the ground will ensure faster carbon reduction.
Even where the technology exists to replace hydrocarbons with batteries we would have to build a lot of new infrastructures and retire others before its expiry date. The synthetic fuels burn cleaner than fossil fuel, every litre stored in the supply system is carbon locked up. Replacing that infrastructure has a carbon cost attached to it as the replacement will likely use fossil source energy in the manufacture. It makes sense to consider a move to synthetic fuels and only replace old infrastructure when it is either time expired as that will use the least energy.

The transmission of electricity at the moment and likely forever requires cables and with the cables, unless there superconducting comes losses, this renders some parts of the planet that are rich in environmental energy unexploitable. In the case of the southern ocean, the cables would have to also pass at extreme depth. One possible way of getting around this is to capture the energy via tidal, wave and wind power and convert it into synthetic fuel in situ either on the islands in that ocean or in floating mother ships of a size similar to Prelude FLNG. This could process the electricity into synthetic fuel that can be moved around to were it is needed.
Bar the last idea the import things is electricity generation the first thing that any government interested in reducing climate change should do is invest in electricity product from clean system not just enough to meet current needs but an amount that looks like oversupply then as the other technologies improve we can focus on using that supply to reduce atmospheric carbon by any means possible. Changing the way we live will not solve the problem, biofuels unless made from the waste product will only make the problem worse.

If you don't know who Robert Watson-Watt was then you should. The situation and threat we face are worse than the ones he did, the need for a solution is greater.

I have been informed of the existence of this paper, from 2013. Since then Direct Carbon Capture has come a long way.

Abstract.
Reducing atmospheric CO2 using a combination of air capture and offshore geological storage can address technical and policy concerns with climate mitigation. Because CO2 mixes rapidly in the atmosphere, air capture could operate anywhere and in principle reduce CO2 to preindustrial levels. We investigate the Kerguelen plateau in the Indian Ocean, which offers steady wind resources, vast subseafloor storage capacities, and minimal risk of economic damages or human inconvenience and harm. The efficiency of humidity swing driven air capture under humid and windy conditions is tested in the laboratory. Powered by wind, we estimate ∼75 Mt CO2/yr could be collected using air capture and sequestered below seafloor or partially used for synfuel. Our analysis suggests that Kerguelen offers a remote and environmentally secure location for CO2 sequestration using renewable energy. Regional reservoirs could hold over 1500 Gt CO2, sequestering a large fraction of 21st century emissions.

State of The Synthetic Hydrocarbon Art

A Phoenix from the ashes on Upper Parliament street.

For a bit of background see this blog from over 18 months ago.
It has been reborn as 18F/3306 Land on Upper Parliament St between Mulgrave St and Kingsley Rd SchoolL8 by the same developer.
The height of the buildings has been reduced by 1 story and there slight fewer flats. Various paths have been reduced to allow more green space and the street plant is up so maintaining the number of trees. A break in the building provides a path through the development address the concerns of the residents.
The objections raised seem to have been dealt with 1 by 1 making it very difficult to raise new objections but I'm sure this will happen a debate on the subject is already going on here amongst those likely to support the development.
I prefer the old development but will happily support this. I attended the planning meeting and the developers have addressed all the planning concerns, I doubt it will stop those with the more bizarre or unreasonable objections trying to stop.
Hopefully, the rebirth of Upper Parliament street as a proper thoroughfare is underway.


Update. The new application if before the planning committee on the 18th of June 2019. See Land on Upper Parliament St between Mulgrave St and Kingsley Rd SchoolL8

This was passed on the 18 June.

Renders from the developer's application. 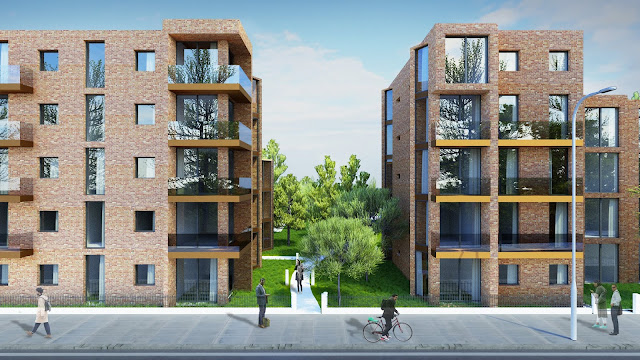 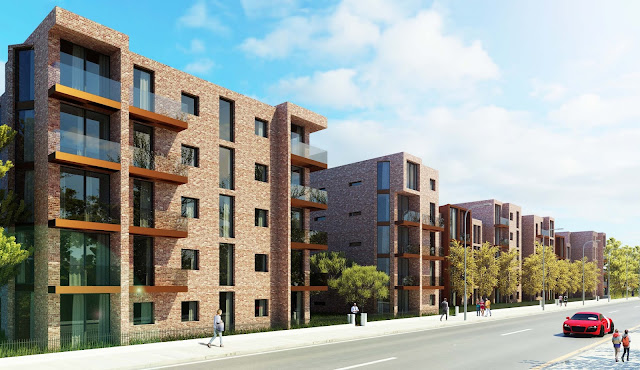 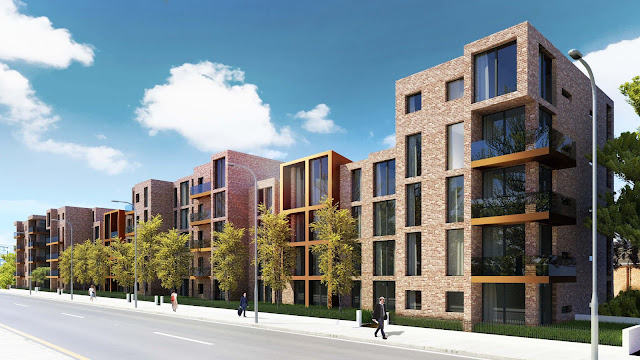 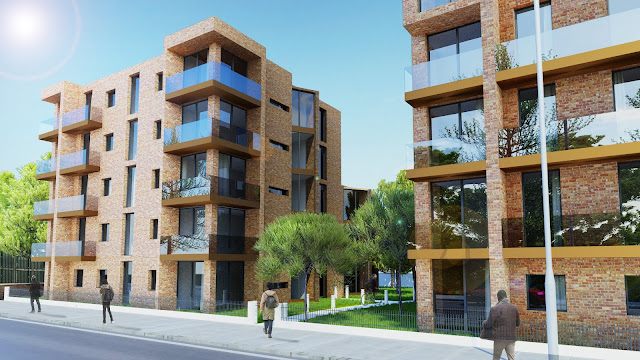