The Government released The Northern Powerhouse: One Agenda, One Economy, One North report, which contains some interesting stuff regarding Liverpool and High-Speed rail, most notably 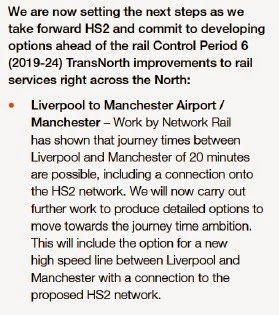 Trans North/HS3
Also covered is HS3 which has similarities to my Pan Northern Railway  through without York, Chester and Holyhead.
The target maximum speed that has been mentioned is 140 mph, this was the same as the target for the West Coast Mainline upgrade in the 90s.
The was for the first generation of Pendolinos, the second generation is capable of 155mph. The reason they don't go over 125 is the lack of in-cab signalling, but under existing plans, the entire system will be set up for in-cab signalling by 2029, according to the International Rail Journal. Electrification from Man to Leeds is already planned as is Leeds to Hull according to the BBC. It is already in place Liverpool to Manchester.
The proposed times for HS3 are
Liv -> Manc in 20 minutes, mean  94.5 mph over 31.5 miles.
Man->Leeds in 30 minutes, mean 85.4 mph over 42.7 miles.
Leeds ->Hull in 45 minutes, mean 68 mph over 51.6 miles.

So all those are already planned before HS3! what extra is needs to happen for HS3?

The OpenOffice Calc spreadsheet can be found here.
The Liverpool to Manchester section, given a Pendolino, allowed to accelerate straight to 140 and decelerate into Manchester Victoria would take 15:35. With various limitations caused by going through stations and in urban areas 20 minutes is very close to the maximum that could be achieved. To make a 20 minutes service possible some work would need to be done, whether that would be passing loops or quadrupling of long sections I don't know, perhaps some traffic could be offloaded to other routes but providing access for St Helens & Newton le Willows is not optional. Complete requadrupling of the section from Lime Street to Huyton Junction would help, that would require work to widen the track bed at Broad Green where the M62 intrudes.
The Manchester -> Leeds time of 30 minutes knocks about 15 minutes off of the current journey time, and is 9:37 slower than the theoretical maximum, bearing in mind this is the curviest bit of the route this is less demanding than the Liverpool-Manchester time and perhaps reflects greater thought and time applied.
The Hull time is only 9 minutes faster than the current time which is the smallest improvement and as this is the longest route doesn't make much sense. Most of the route is quite straight except for a large kink around Selby.
The average speed for Leeds -> Hull is 68.8 compared with 94.53 for Liv->Man and 85.4 for Man->Leeds. This seems a bit slow, given the profile I would expect a mean speed faster than the Man->Leeds speed. At the same average speed as the Liv->Man journey Leeds -> Hull is about 32:45 and at the Man -> Leeds is 36:15. So it should be possible to knock a further 10 minutes off the overall journey getting the overall journey down to 1:25.
A second generation Pendolino is capable of 155mph, similar to the Advanced Passenger Train, in order to operate at the higher speed the APT had enhanced brakes, these are not on the Pendolino. If a system capable of similar braking to the APT's Hydro Kinetic system were fitted then speeds over 140 could be achieved, which might allow some more savings or at least greater safety margin.  One candidate for the breaking system would be Circular or Linear Eddy Current Braking both of which have been used on railways in excess of 155mph.

Beyond England
Currently, the time from Hull to Holyhead, 218 miles, would be 4:09 with an average speed of 52.5 mph, if some stops are taken out leaving only the major stops, then the journey can be down to 3:39 with a mean speed of 59 mph. Whilst this probably faster than it can be driven, the current journey would be longer as it would involve waiting for connections at the principal stations.
Using the 140 mph maximum then with the full set of stops the journey could be made in 2:19 with a mean speed of 94 mph. With only the principle stops that drops to 1:42 at a mean of 128.
The theoretical speed would obviously not be possible but a time of between 2:30 and 2:45 should be possible, knocking 1:24 of the current possible time.
A Liverpool Holyhead journey, via the soon to be reinstated Halton curve, would take about 2:00, this time, is even more speculative than the others as it involves the Chester to Runcorn parliamentary train, which only runs early Saturday morning during the summer, and is in no rush. Taking out the stops gets down to 1:52. With the high-speed options, the time drops to 1:00 with stops and 51 without. Giving an estimated real world time as 1:15, a 45-minute saving.
Electrifying and speeding up Chester to Holyhead would improve London-Holyhead times, as well as local trains, as part of HS3, it would provide a very useful link between the Ferry Terminals of Hull and Holyhead.
Posted by pirate at 00:53:00 No comments: