By council standard's this is quite short at only 53 pages of A4 or 105 pages of A5 depending how you look at it. It has a contents page with no internal hyperlinks. Hypertext was first postulated in 1945, first implemented in 1968, it would be nice to think the council could actually use them properly by 2017? Producing documents to the PDF/A format allows internal links, it is ridiculous to produce a document that is not designed for e-reading.


What I actually said

I believe that the location of the car park is flawed. Placing a multi-storey car park directly over the railway cutting is the sensible things to do. This has been done in several places in the UK. Other structures have also been built. In Liverpool, the section of cutting through University Place has been covered. See http://peterirate.blogspot.com/2016/09/the-green-line.html for more details. This frees up more space for buildings or green infrastructure.
Not only should green roofs be encouraged on site, so should green agriculture see http://sustainablefoodtrust.org/articles/can-urban-growing-feed-cities/ & http://www.youtube.com/watch?v=S2xyUsHSRdk & http://www.huffingtonpost.com/x-prize-foundation/urban-farming-hits-the-ro_b_8149592.html Space is limited but as with the railway cuttings no space should be left unused. It is a pity that with Networks Rails proposed remodelling of the Lime Street Approach the opportunity is not taken to enclose the cutting.
Additional pedestrian and cyclists connections to Edge Hill station should also be incorporated.

The lack of recommended uses for the roof space is a bit worrying. A building properly built with a roof that uses the sunlight for one purpose or another is making full use of the land if that roof is also used for growing things then it could be argued that it is a zero loss of green space as far as biology is concerned.
The other thing was how rectilinear all the proposed designs where I do like some curves in the buildings. 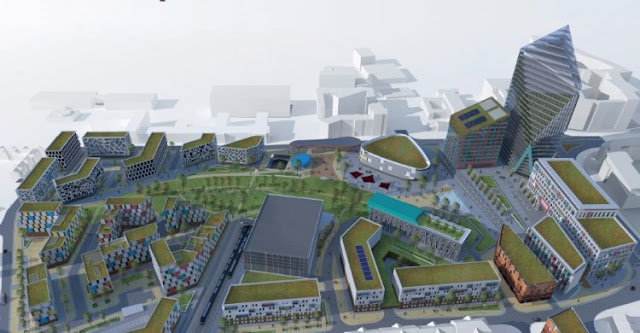