Having turned my non-existent training in urban planning to solving all the problems of Liverpool, I have decided to have a look at some other places I have been to, this is going to be quite a short list but I thought I'd start with Norwich, a place I quite like.
National Library of Scotland side by side, modern & historic map.
One of the main problems that might face Norwich is where could it expand without destroying its current atmosphere? The answer is provided by the disused route of the Lynn and Fakenham Railway line. The red line below. 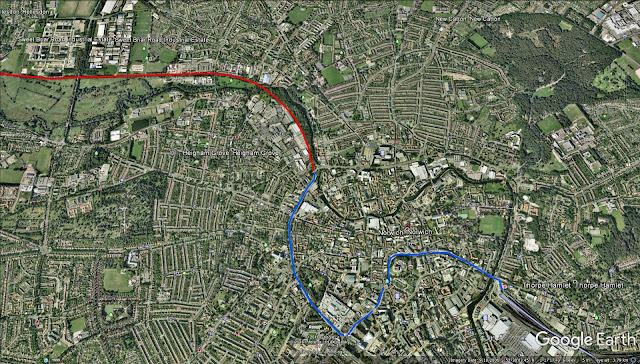 Using this route to provide access to a new high rise zone to the north of the city, about where the industrial estates are. It would not only be reinstated as a rail line but also as a cycle and walkway, to provide quick access to the city centre for work etc.
The line would be extended through the city to the current railway station by a new build tram line, in blue above. This would act as the core line for a future Norwich tram system.

The reinstated line would not be heavy rail but would be light allowing it to connect to a tram line, which could connect to the mainline railway station, then using a tram/train concept out on the Brecklands line towards Attleborough or the various railway lines, current and disused, to the south and east of Norwich, providing the city with  a proper light rail system, including the Norfolk Orbital Railway.

While it isn't the cheapest I think Norwich would be a suitable place for a modern ground-level power supply type of tram, the Bordeaux tramway being an example. 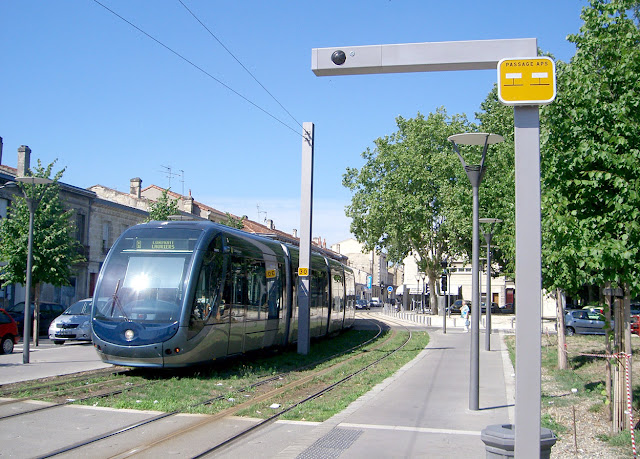 Just in case any is concerned about the idea of tower blocks, perhaps I should have said sky scrapper but it this kind of thing I had in mind, which are current proposals for Liverpool, from a distance they would provide a great view of Norwich and look good when looking from the city centre out.

After several months most of the comments for Liverpool City Council's Draft Liverpool Local Plan seem to be in or at least the first 1137 of them. So as a follow up to my seminal Hell in the PDF:Liverpool’s Draft Local Plan Consultation I thought I would comment on the comments.
There is only one set of cloned comments from the supporters of Sefton Meadows, the idea seems to be that if you repeat a lie often enough it will become true. The are filled with the normal false environmental claims and due to a mistake by LCC, some of the locations of these commenters was released. Showing that the vast majority could only be termed vested interests.
Some councillors seem to have gone for the mass voting scheme as well where all 3 of a ward's councillors would submit the same comments.
One of the main misconceptions of the green commentators is that grass can somehow aid in the fight against global warming. It cannot for a couple of reasons, every so often it is mown down, doing this uses energy which at the moment if diesel. I'm not sure exactly what happens to the cuttings but unless they are sealing in vacuum packs and placed into the disused coal mines around St Helens, then the carbon they contain will soon be back in the atmosphere.
One of the councils own departments recommends adopting a system pioneered in Bristol where instead of replacing any trees removed with a sapling. The number of saplings planted is proportional to the girth of the tree. This is the Bristol Tree Replacement Standard it seems very sensible to me.
The exact process from now on is a little unclear but by the end of 2017, the comments the full plan is supposed to be ready. Though when it becomes legally binding is not clear. How the comments will be assessed and integrated has not be made clear, there dow not seem to be anything other than a very vague provision for some kind of feedback. I suspect a lot of the comments will just quietly be ignored. No public committee meetings no week of debate on a comment by comment basis by the councillors. For a document that may be very important to the future of the city, the lack of public debate is quite astounding. Especially if you consider the kind of scrutiny thatHS2 was given the transport committee, were multiple members of the public were called in to expand or explain on their comments.
Surely it is worth a week of the councils time to debate this in public and with the public, if for no other reason than to let the population see how the council works.
Any chance Malc?