I have given some thought to the junction that would link my preferred HS2/Liverpool link to
the planned trunk. The requirements I set were a straight through connection to Manchester without using the main north-south trunk, no increase in the set of points on the main trunk and keeping speed as high as possible.
In the end, I came up with 3 options the Option 1 fulfils all these criteria, with minimal changes to the existing HS2 phase 2 plan. Option 2 would require some changes to keep the number of points down, while Option 3 is the simplest and comprises most of the principles, but is the one with the least new land take but also the slowest speeds, due to the tight radii of the curves. In order to keep within HS2 already published acceleration and speed requirements the line around the junction would need to be quaded but this, I believe has been allowed for in the original plans. I have assumed that the route to Liverpool uses the Warrington and Altrincham Junction Railway at least through Warrington.
The maximum speed that seems acceptable on curves is given by the table below, the data is taken from Minimum railway curve radius with the diagrams I have had to approximate the curves.

The existing proposal for phase 2 includes a junction north to east, I am not entirely sure why, given current plans have the GC route finishing before Wigan, any trains from Manchester north would have to be classic compatible and   already some routes north available via those, the same is true for Liverpool northward. So, for the purposes of this blog, I will consider the routes north to be optional though I will leave the existing planned line in red. 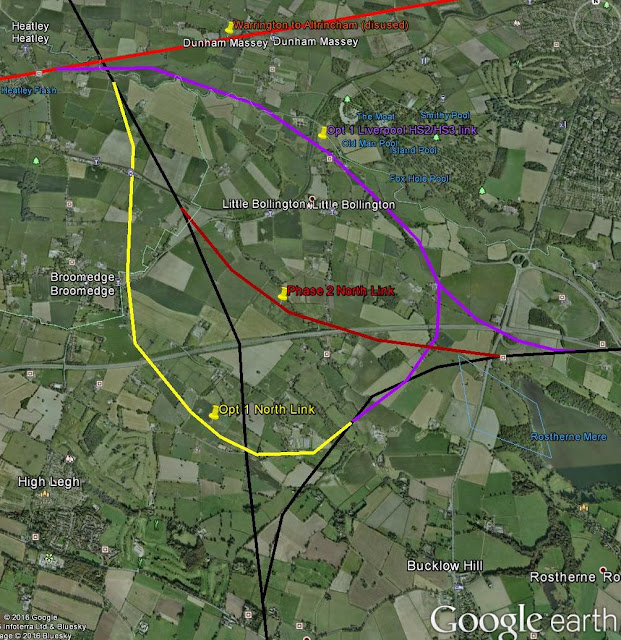 This arrangement fulfils all the criteria keeping to radii of over 5000m allowing running speeds of over 200mph. It would eliminate the north chord suggest for phase 2 and replace it with a longer chord further west. It would, however, entail going through 270 degrees to transit between Liverpool and HS2 north.
It is unlikely that such speeds would be permitted on the section of line from Warrington as it passes through some residential areas making the large radii redundant. 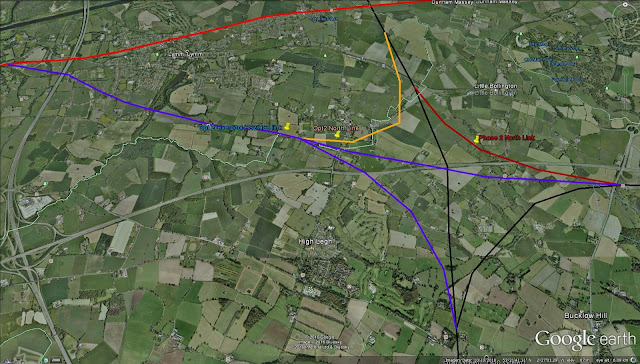 The simplest way to avoid some of the line speed restrictions would be to leave the Warrington Altrincham route earlier, to the west of Lymm close to the M6, to avoid steep turns it would mean leaving the route before the M6 so the existing under pass could not be used. It would involve taking a new cross country route of some 8km to link to the Manchester spur, with a chord to the south, which could use the same sets of points on the trunk as the Manchester spur.
To the north, the chord would have to be somewhat tighter and may involve adjustments to the north junction proposed for phase 2 in order to keep the points countdown. However,   geometrically it is the simplest junction and involves little change to the routings planned in phase 2. 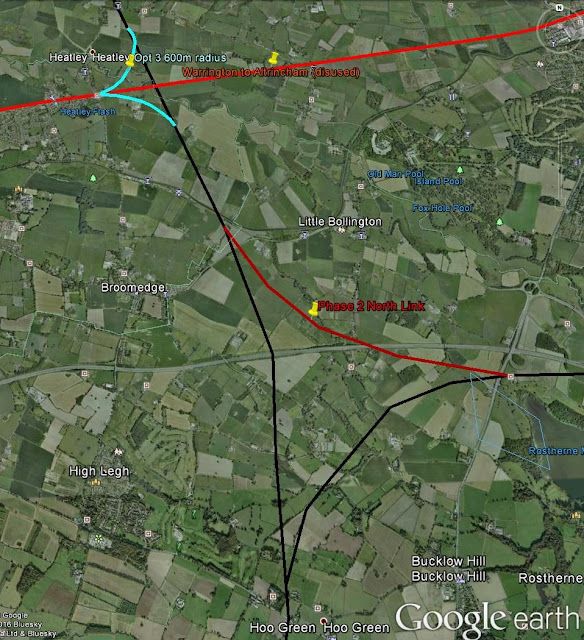 This is by far the simplest option reusing the maximum amount of old right away and adding the minimum new track, it does this by sacrificing speed the curves from the Liverpool route to HS2 are of about 500-600m in radii limiting speed to 70 mph. There would no option but adding points to any northern routing.
However, if the section of line between the northern crossing was quad, all the way to and beyond the southern Manchester Spur, then the points in that direction could be kept the same and the quading would allow acceleration to full track speed. Access to Manchester is via the northern chord proposed for phase 2.
As a schematic it would look like 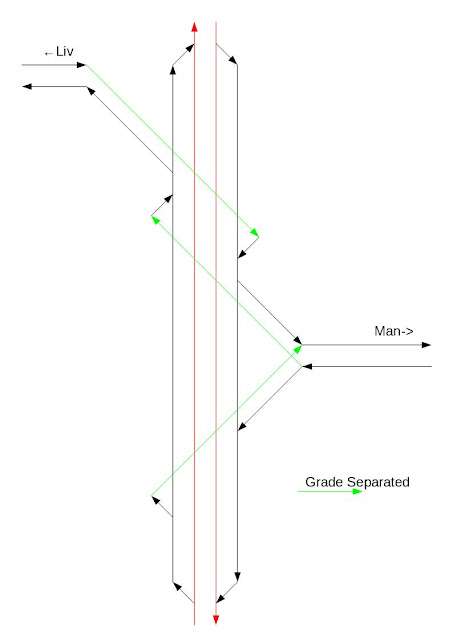 My simple conclusion is that Option 3 is the most likely. I doubt the extra speed of the other 2 could actually be realised. Option 2 may be the option that has to be picked to calm the noise concerns of the residents of Lymm.
Posted by pirate at 01:02:00 No comments:

I would like to write blog entries more often but I cannot really come up with subjects. In the average day I am sure I have thoughts which could be translated into an entry and some people might actually like to read but I don't keep a minute by minute diary of what is going on. I do not attach sufficient significance to the things I think to merit remembering them in half an hour, never mind when I get home.
The reaction to blogs seems to vary greatly I was informed by someone connected with the BBC and a Producer, that the only reason I blog is because I, like all other bloggers, have an over inflated opinion of the value of what I say and think. This struck me as being rather odd for someone who works in the mass media, unless of course his ego believes that his though opinions are for some reason worthy of public broadcast.
I've ever claimed that this blog was anything other than rambling. If it has any conscious purpose it so that in ten years I might be able to point to something and say look I'd thought that years ago. That might seem arrogant but I don't think , if it ever happens, the fact is going to be anything significant, I also don't think I will be unique in having the thought.
I believe most great ideas have been had many time before that make it big, and make someone rich or famous, they were had by lots of people like you and me, who either didn't know the value of them or couldn't make people see the point. Ideas spring up everywhere for random interactions, chance meetings and drunken ramblings. I doubt Einstein was the first to think of the mutability of time or Newton to conceive of gravity, they were simply the first people to have the ability to use the idea, to make sense of it.
Ideas are a product of society not individuals, we walk around bombarded by similar experiences, similar memes, an idea’s moment comes when enough of society has been made fertile to receive it, where the enough people daily lives provide them with the tools to comprehend it and see its value.
Sitting on the edge of a cave, at the dawn of humanity, seeing the moon rise and the sun come up and wondering if all heavy objects attract each other and thinking that that attraction may explain the lights that move is the night sky, is a lonely place to be.
Posted by pirate at 00:43:00 No comments: