So Pete Burns has died and the musical wannabes and art types are beside themselves. Well my impression of him was that he was a git. I sure he suffered a fair amount of crap when growing up, mostly the scallies but that doesn't excuse his behaviour when humiliating people who didn't share his taste in music or his outlook. The stories the people tell about him in Probe are true and I'm sure he upset a fair number of people in their teenage years. I was a prog rock/heavy metal fan and going into Probe, when Burns was there, was just a pain, just enjoying snide little remarks etc. I used to just rummage through the Albums out front there was just too much sneering if you asked for something the staff didn't like in Probe.
Lots of the comments about him have referred to him being High NRG and High maintenance, which to me sounds like he was an absolute pain in the arse. The kind of git who would put music on loud at 5am and then complain about someone putting music on at 3pm because he was trying to sleep.
I have had several comments deleted when being critical of Burns on Liverpool sites, most of which were just pretty plain stories about what he was like in Probe.
The one thing I am sure about those is that he wouldn't have given a flying fuck about what I said about him, he knew he was a screaming bitch and didn't care, those who want to play this side of him down, and dealt my comments would have incurred his scorn for being so fucking childish. He might not have been that nice, IMHO, but at least he was honest unlike his fandom.
I'd happily have Burns alive and Pete Price dead if that any consolation.
Posted by pirate at 17:58:00 No comments:

When faced with any new task, that isn't the writing of software the first question that any self-respecting programmer will ask is "Can I write some software to do it", if the answer is yes, then a junior with perhaps as little as 5 years under their belt, will proceed to write it.
Towards the end of their first 5 years, they may begin to realise that spending 2 weeks writing a small utility that automates a process that takes 3 hours by hand needs some justification.

The will after some time come up with an inequality like the one below.

and an app to do it, as, of course, that is the only way to get reliable results, basic arithmetic is not a software developer's strong point, computer science is, after all, a branch of mathematics.
Of course, this is only Version 1 of the software and its inadequacies will become apparent somewhere towards the beginning of gamma testing when it begins to indicate that software you actually want to write is not viable.
The obvious flaw in the calculation is that it does not take into account the number of similar tasks that the application could be rewritten to help with and the time saved in writing these.

They will after some time come up with an inequality like the one below.

again, of course, this will need to be developed as software Version 2.

Well of course soon you will see the flaw that writing this app or a version of it for different types of task, which have different numbers of preparation tasks and post run tasks, is not fully catered for, and is going to need to be handled by some similar but different software. This means that Version 3 will not now be an application but will be a Library or Generic class with some demonstration builds, 2 of which will be implications of Versions 1 & 2.

To make it even more even more generally available Version 4 will be a set of Excel macros, while version 5 will be an Excel clone. This is actually how all truly useful software is conceived and developed any other way just leads to things which would be better done on paper. All good software is the results of Software Developers or at a push, computer scientists solving their problems while trying to do other things that interest them, most of which are writing programmes. If people start trying to develop software to fix other peoples problems we will end up with it being fitted nasally.

The master plan for the expanded knowledge quarter has been released and a Merseyrail station for Paddington is mentioned, again and even appears on one of the CGIs. See Revealed: billion-pound Liverpool masterplan to create THOUSANDS of jobs and transform part of city. Other than a connection to central it doesn't say much else about it.

In my blog A New Edge Hill, I speculated that it was the resurrection of the Edge Hill Spur scheme, part of the original plan for Merseyrail(MALTS). This would involve building tunnels along the route in yellow and blue below. This would require about 1 mile of new tunnel. 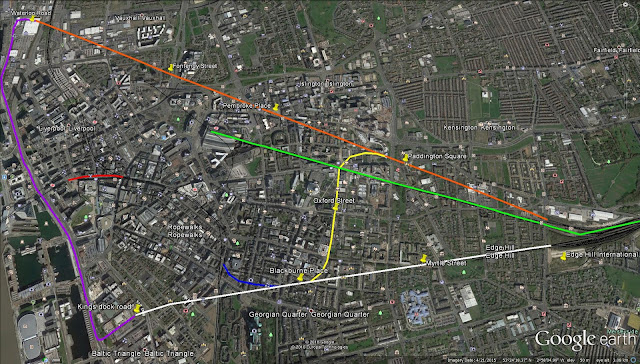 Some have suggested the alternative below, which uses more of the length of the Victoria/Waterloo tunnel and about half a mile of new tunnels, to connect to Merseyrail north of Moorfields. The light blue section is the new tunnels. 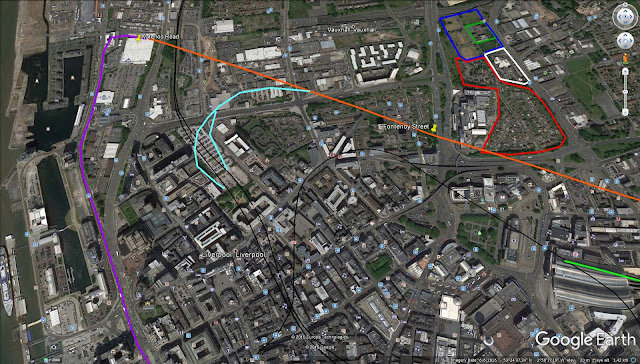 While the new tunnels may be half the length of the MALTS scheme, overall length is longer, as a much longer section of the old tunnel is used, and while tunnelling may be thought to be the expensive bit, building the stations is far more expensive and restoring the old tunnel will not be cheap. Once you have got all the kit on site and people trained up the difference in cost will be minimal. It is also unlikely that this northern junction could be constructed without interfering with services. The preparatory work in the 70s done for the Edge Hill spur, south of central makes that much more likely.
The major argument against this plan is service provision, currently the northern line at Moorefields has 12 trains per hour passing in each direction, any new service would have to fit into that.
Then there is the question of where the trains will go after central, currently of the 3 services running into central only the Southport service continues on to Hunts Cross.  The other two either sit at a platform or use the reversing siding, this was not what the station was designed for, it was designed with the Edge Hill spur in mind so that all services would pass through, 1 of the terminating services would have gone on to St Helens and another to the outer loop or perhaps Widnes South. Adding an extra service, which terminated, would most likely mean adding an extra platform which would not be cheap.
The Edge Hill spur scheme could add access to both old tunnels, so that, eventually, more city centre stations could be added, with connections to central and possibly the airport.

For 6 weeks there will be no direct civilised form of transport between the Wirral and Liverpool as Merseyrail refurbish the lines in the original Mersey Tunnel, which is 130 years old this year. So things have moved on a bit since it was first built and you would hope that in real terms building a new one would be cheaper.
The original railway was about £500,000 per mile in 1885, about £57 million today. The Queensway Road tunnel of 1934 cost £8 million or about £517 million in 2016, while, the Kingsway tunnel was twin bore and completed in 1972 for £33.5 million which is about  2016 £470 million in 2016.
The Crossrail twin-bore tunnels cost £69 million per km in 2011 about £80 million now. I'm using Stephen Morley's site for calculating the modern value, other sites give different results. 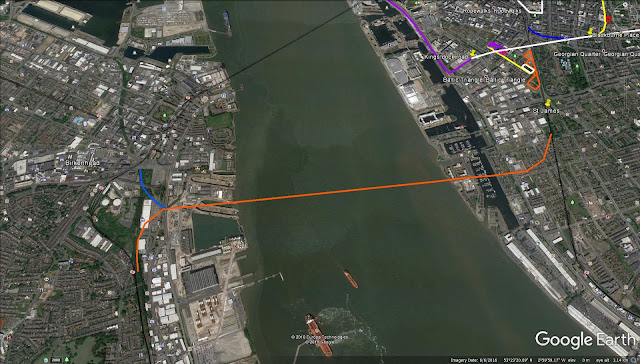 The orange line one possible route connecting the Northern line, heading south, with the Wirral line toward Chester & Ellesmere Port and beyond, it is 3.2 km long, giving a total of £256 million. Given the improvements in tunnelling technology and bearing in mind the extra expense that was put into the approached for Kingsway and that it is double bore of larger diameter and that Queensway has an even larger diameter that does seem like an unreasonable cost. It could be cheaper if a single bore was used, which may be allowable with such a short tunnel, though modern safety regulations could mean it has to be 2. The short blue line would allow the integration of parts of the Birkenhead dock lines.
One reason to build it, other than to improve redundancy, would be to allow extra trains directly to Wrexham, through the original tunnel or if a junction facing Hamilton square was also included then a loop using both tunnels via the Stock Interchange Line could be provided.

Email ThisBlogThis!Share to TwitterShare to FacebookShare to Pinterest
Labels: Merseyrail

The wind is blowing but the wind turbines are not going around.

On the streets of Liverpool, amphetamine prices have reached an all-time, fueled by the need of delegates to stay awake during Diana Abbott's speeches.
LSD has been stockpiled in expectation of a big demand in perpetration for the leader's speech, while combi packs of Prozac and E are available for Wednesday.
Special supplies of 20:20 have been rushed in for Dennis Skinner and an emergency order has been placed with both Greggs and Sayers on the expectation of big demand from John Prescot after Joe Anderson turned up and answered the big question of who ate all the pies.
The Rosicrucians were everywhere aided by the fact the did not exist.
Ships chandlers across Liverpool reported brisk business as the Fabian wing of the party battened down for squall Momentum to blow itself out. 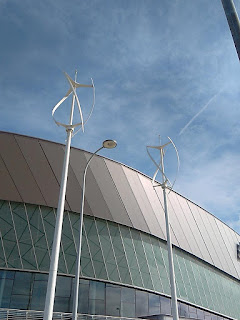 One of the finer things in life is the Eccles cake, with its light flaky pastry it is far better than the dry husk of a Chorley cake or Welsh cake, these inferior products show that the sum is not always greater than the parts. A true Eccles cake warm is a fantastic thing, with a light custard or vanilla sauce, well worth the risk associated with such a things, especially if you wear the recommended safety gear. 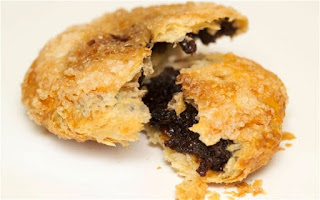 If you can get to Sayers just after the have been taken out of the oven then you are in luck, these are possibly the best Eccles cakes in the world. The Aldi cakes are of course prepared off site and come plastic wrapped but they are wonderfully moist and perhaps just a little too sweet, the slight tang of the fruit is missing but all in all a very good effort, especially at about 95p, compared to about 160p for Real Lancashire Eccles Cakes which are too close to a Chorley Cake for comfort and rather dry.

I do not bake but this looks like a decent recipe to me Hobbs House Bakery, though there a plenty out there and extra bit of zingy zest does not go amiss.