Needs to be Longer in Liverpool

Liverpool airport current runway is a modest 2,285m, while this is a reasonable length it prevents the biggest aircraft from taking off at their maximum takeoff weight, which limits either the payload(passengers) or the fuel load(range).

In the images below the lengths of other airport's runways are marked. The pink is the current runway at Liverpool, while the red extension is the approach lighting system(ALS). The green line in the middle is Manchester airport's 3,050 m runway, the light bit again the ALS. Yellow is Heathrow's 3902-metre strip. 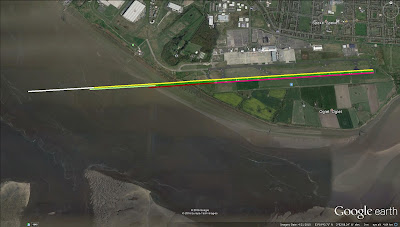 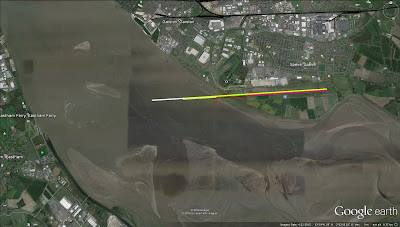 On Madeira the runway has been extended stilts, this does somewhat limit the load the runway can take.

Sydney was extended by building a cofferdam and infilling.

To get to the length of Manchester's runway, with a taxiway would need a strip 375m wide  and would require reclaiming a triangle 11.5 hectares
to go to Heathrow's length would require an additional 854 meters oblong of 32.3 hectares

How it could be done.

There are several methods of reclamation that could be used the simplest is building a cofferdam around the perimeter of the area and then filling it with dredgings from the river.While this would damage the river bed and remove some of the existing shore, the total length of shore would be greater when it was finished. The river would be made slightly narrower which would increase the flow rate and probably result in a change in the deep channel position. This happens anyway and requires the river to be regularly surveyed.
To build on columns there are numerous methods but one to consider would be building floating the extension sections, the float them into position before sinking them on to a prepared river bed, this would interfere with the flow of the river less. The columns would soon be covered in various forms of life but would quite likely soon silt up. Unless this could be done considerably cheaper than the perimeter dam, I doubt it would be worth considering.
One system for doing this is below.

Why extend it at all?

The world's largest aircraft in passenger service is the Airbus A380 at its Maximum Take of Weight it requires 2,950m  of runway, meaning it can just about operate from Manchester's runway, while the 777-200ER takes 3,380 m and several 747 variants cannot take off from Manchester at full load . So any growth in that aircraft which requires a long run, will not be capable of using Manchester and obviously it cannot use Liverpool now. So if an extension is built then it would seem sensible to at least reclaim sufficient land to build a Heathrow length runway.
Changes in aircraft propulsion system to say electric may require longer runways as the installed power would be less, leading to lower acceleration and a need for a longer run to get up to speed.
The Northern Space Consortium investigated using Liverpool as a Spaceport that would need a longer runway to operate something like Skylon, the increase runway speed and weight would require a very strong runway. The current runway is very strong due to the nature of the ground, any extension would need to match that strength.  Even for Suborbital Point to Point hops like the proposed Reaction Engine A2 or SpaceShip 3 the longer runway would be useful.
It is IMHO a project worth doing, I'm not sure of the cost though a lot less that Liverpool possibly in the region of £75,000,000 for a Manchester length & £200,000,000 for a Heathrow length but that is simply a guess, assuming land reclamation at about £5,000,000 per hectare ,runway at £7000 per linear metre of runway and £6000 per linear meter of taxiway see here.
Posted by pirate at 23:58:00 No comments:

What is the buzz.

These are pictures of a new art installation in Derby Square Liverpool.

For those people with even the most basic understanding of the National Grid will appreciate that the 50hz buzz, for the early years of Radio broadcast, was an annoyance that was solved by using batteries even in homes that had electricity installed, many still used Gas lighting.
The techniques for extracting it from recordings have been known since the early 19th century when Joseph Fourier invented Fourier analysis it been used for forensic analysis for more than 10 years but to describe it as "surveillance" is simply tin hat conspiracy theory click baiting. The only thing that HMG actually watches for this technique is the mains itself and it isn't just them people who specialise in forensic analysis for court use make their own recordings.

The signal in the UK has always been tightly regulated in part to allow synchronous clocks to work, there was a requirement for the number of cycles in a day to be a fixed number, so the national grid had to make adjustments to counter the natural variation. In conjunction with Radio Clocks and the time signal, this created a nationwide accurate time, which replaced railway time, which had replaced solar time.
It is just a pity that the entire thing has been hijacked by the word surveillance.
Oh and one other thing if you are an electronic engineer or a HiFi enthusiast who has spent years trying to get rid of the 50hz buzz or perhaps someone who likes to sit quietly in Derby Square and watch the world go by, it is too noisy.
If anyone fancies playing with FFTW I have used this C library on several occasions FFTW    there is even a play one in Java for the amateur in JTransforms.  It is not limited to sounds but can also be applied to images see here. 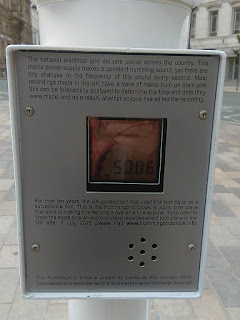 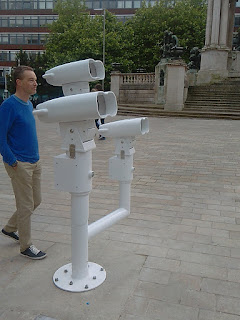 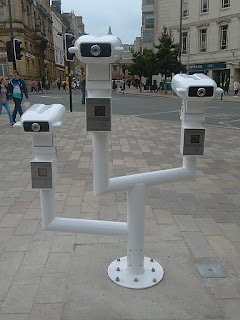