Over recent years many studies, produced by a variety of organisations, 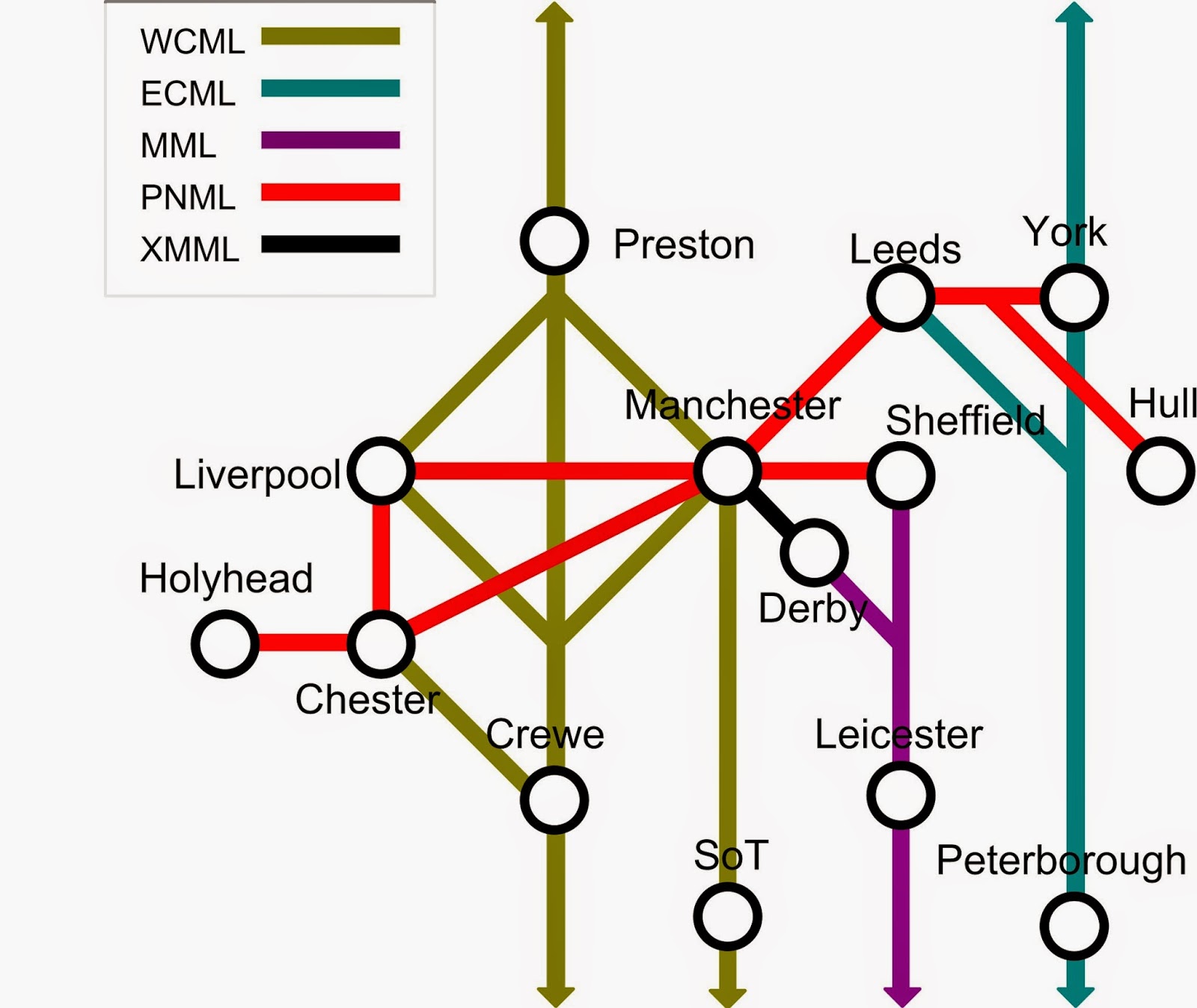 have put forward plans for the development of the rail network in the north of England. Those plans have a considerable amount in common but have never been unified into a single plan. I consider it likely that a plan that combined all of the various schemes would produce a benefit greater than the sum of the parts.
The majority of the Northern Hub plan is either beneficial or neutral as far as the Liverpool City region is considered, however it does concentrate on Manchester and in doing so produces problems for the overall network and does not maximise the benefits of the enhancements being made,
In the 20th Century, Great Britain has lost 1 main line and had another curtailed. This has reduced the redundancy in the network to an unsustainable level.

Presenting the improvement of east, west links as a new mainline would allow easier comprehension. Such a route would have a primary alignment from Liverpool-Manchester-Leeds-York-Hull. With the upgrades announced in the Network Rail document it would seem that the Chat Moss line would be the best candidate for the western part of the route and would benefit from a quad line throughout as would the rest of the route.
A route is operational and would only need to be modified for the performance required for Main Line operations and possibly being converted to Quad line.
A more direct route could use the York to Beverley Line though a direction change would be required at York or the building of a new curve allowing from the south.
The East Riding of Yorkshire Council's Local Development Framework Transport Development Plan for 2006 projects a cost of £239 million to reopen the line and the Council's Core Strategy Document in 2008 maintains this commitment.
The North Wales coast mainline from Chester could also be included as a Branch, providing a fast link from the ferry port at Holy Head to the port of Hull, in addition to the connection to the port of Liverpool, that the main route would provide, providing a valuable link in Ireland's connect to the European mainland.
Such a TransPennine Main Line would connect the existing WCML and ECML and any extended Midland Mainline, providing redundancy on routes out of London. It would perhaps also provide a link to the occasionally mentioned One Wales line.
The possibility of an addition east-west Main Line from Norwich via Birmingham to Bristol and South Wales would seem reasonable

The proposal to improve the connection between Derby and Manchester, using the Manchester, Buxton, Matlock and Midland Junction Railway line could be seen as the reinstatement of the portion of the Midland Mainline route that was closed in the 1960's, though the route actually used could that of the Great Central Railway, which closed at the same time. Either way, it would be easier to explain to the public if it was presented as the extension of the Midland Mainline. Unless there are constraints imposed by declaring something a Mainline, the only reason for not phrasing the proposal this way would be the tacit admission that some of the previous closures were a mistake.

The development of a train as outlined as APT2 would enhance all of the 125mph mainlines on Great Britain, providing benefits with no additional infrastructure improvements beyond those already proposed.

In a world where a sizeable portion of the electorate don't vote and in a city like Liverpool, who through the experience of Hillsbrough, have experienced the institutional corruption of the police, you might expect that the person elected by the public to be eager to be seen to be holding the police to account, but no Jane Kennedy takes the normal politician's role and has become the public face of the police, not the face of the public in the police.
Happy to accept that when police officers are caught acting in a criminal manner on video, whilst other police stand around watching, that it be dealt with internally and not brought before the courts, where the CPS asked for an opinion or was just some pats on the back in private?
The problem is that Jane was elected because she was a member of Labour, she doesn't have to do anything locally, what she is doing is appealing to the Law and Order brigade, that isn't the group that is interested in the law of the land but the group that is interested in having their Daily Mail like views enforced on society with no questions asked.
Her position is to appeal to the right to not reform the police, not to give the IPCC teeth, not to give the Tories even the slightest opportunity to make claims about soft on crime, based on simply wanting the law followed by all. The people whose votes she relied on to get into office will not be put off by her stance, it wouldn't cost her a single vote to be tougher, but some undecided voters somewhere in the UK may be affected if the Daily Mail uses the criticism of the Police by a labour politician to attack the party. For the sake of some floating voters in a marginal, leafy part of the world. Jane is not representing her electorate, but someone else's.
You can see the integrity of those who take the "Law & Order" positions by their calls for the Home Secretary to deport someone against the law. The same home secretary after having been forced to bring the UK extradition standards up to international levels fumes and plots to prevent supervision. It's important to remember the European Convention on Human Rights was written by British Lawyers, trained in the common law. It is as British as it is possible to be, it was designed to in the light of the horrors of WW2, and designed to identify and correct things that the Nazis and the British had done wrong in the run up to WW2. They are not people anyone should be trying to appease but should instead confront.
It's not just me that thinks that but back in 1997 Robert Owen QC put it far better here.
Jane of course views even discussing this as a risk so comes out with her terminal "Not Playing".
As long as there are National Political parties each of their members will never be the representatives of their electorate, but will instead by a representative of the party. It is a rare beast that will put a representation of their electorate before the party. You'll recognise that rare beast by its possession of integrity, something Jane said goodbye to long ago.