As we wait with bated breath for Merseyrail's 30 year plan got to ask why we haven't seen it yet? See Echo article here.


A PDF that details some of the infrastructure in the region and an explanation of some of the technologies can be found at Merseytravel Plan.

And some thoughts on HS2/HS3 From Lymm to Lime Street.

Some of the old lines have very little use, but if you include all of them and add a bit of imagination then you get the map below. There really should be a link between Sefton & Maghull station and Old Roan, but just a bit too much trouble. It is worth keeping in mind you could do it all for 1/4 the price of London's Crossrail. 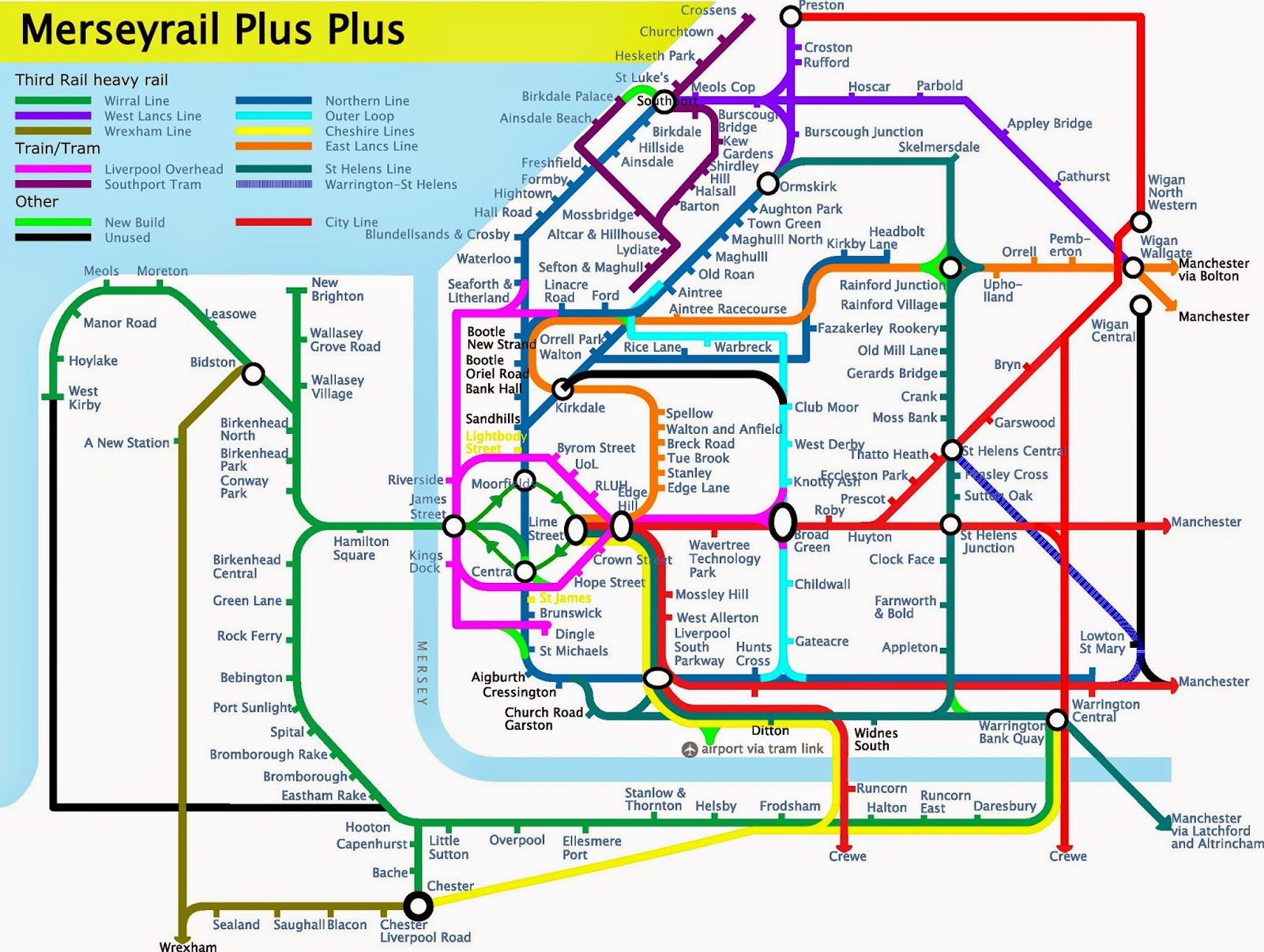 The terror of being trapped without access to air travel seems to be gripping the nation as an Icelandic volcano rumbles a bit. Bárðarbunga is by no means a small volcano and one that has in the past produces some big eruptions, big enough to have an effect on the climate in the north Atlantic. Effects like those of Laki in 1783 are possible today and because of the greater population the results could be just as disastrous. The tell tale of events in about 1258 have been found in burial pits in London though the volcano itself have still not been located, it was far further away than Iceland as it must have been in the tropics.
These events fell upon Great Britain and Ireland with no warning and also no explanation, unsurprisingly given the beliefs at the time all sorts of religious explanations were put forward. Today I can sit and get a list of the volcanic activity going on in Iceland, with a delay of only a few seconds, via this website. Even without that if a major eruption was to occur there would be news flashes on all broadcast media, twitter would explode with a force similar to that of the volcano.
The amount of airspace that was closed as a result of the Eyjafjallajökull eruption of 2010 caught a lot of people by surprise, it wasn't just the size of the eruption, which was given as VEI 4, but its location close to so many major air routes.
Bárðarbunga eruption of 1477 was a VEI 6, as was Laki's 1783, this represents a 100 fold increase in ejecta over that 2010 event. The effect of such an eruption is global on a scale similar to the biggest recorded eruption the 1815 eruption of Mount Tambora, which knocked 0.5 C of the world's temperature over the following year.
Such a giant release would be the first in the high technology era and slap bang in the middle of the most highly developed part of the world. It is not if there are vulnerabilities, to such natural events, but which vulnerabilities will be exposed by such an event. The impact of dust was felt on air travel, but the injection of even greater quantities may start to affect radio communications, if not at ground level, then between spacecraft and the ground.
We have seen a couple of hard long winters recently, which people are connecting with reduced sunspot activity, increased instability in global weather systems, caused by the increase atmospheric CO2. A big eruption now will cause problems, mostly likely at worse gross inconveniences rather than anything civilisation threatening, but so far our high tech world has not been subject to some of the electromagnetic effects that we know have happened in the past and each time they are, tested problems are found. We narrowly missed a major Solar Flare in 2013 and a minor one at Halloween 2003 but we haven't been hit by a large Geomagnetic Storm  since the Carrington Event of 1859, again while it most like will not kill civilisation, it is something we are very blase about.
Unlike asteroid impact, which we currently can do nothing about, making are electronic and electrical system more robust is something we should be aware of, and prepared for. Ironically, in the dark days of the cold war when we were the greatest threat to ourself, we did take precautions against EMP, but we gave it up.

It is all very well, having a blog, but it means thinking of things to write. The most interesting things about this blog is its complete and utter lack of regular readers. While it is somewhat disappointing it is probably typical of most blogs.
You may have noticed adverts on this blog provide by Google, given the current rate at which it is accruing clicks it should be something like 2020 before I get my first payment out of it. Which is considerably more than my writings have ever earned me before.
Any apparent improvements in the grammar or spelling of these articles are down not to me learning anything but to the improvement in grammar and spell checking technology that I have access to. In a lot of ways it is infinitely preferable to being told off in class by someone who will not tell you the correct spelling but any how expects you to learn. Perhaps children will in the future use better spelling and grammar because they have not been told off by for doing it badly, but have just got rid of a few red lines that the computer drew on the screen.
I can't say I have put a lot of effort into the blog, the articles with the most effort are those where I have lifted most of the content from other documents I have written, but I've put slightly more in than some and they manage to accrue at least some random followers but this blog nothing at all. It isn't like I haven't rammed it down some people's throats via their comments sections of newspapers and through twitter. What this tells me to some extent is that my sociability is not down to me smelling bad, which at least is some relief.
The exact value of this posting is zero, if it earns even a single penny it will be over achieving.

This is there document 20 Miles More Report, it is a lot more detailed in terms of benefit analysis and includes several other possible routes. The area they highlight relating to the plans I have suggested here are the cost of a subterranean station at lime street and the cost of path widening.

These are all things that HS2 Ltd is the best position to assess but all the suggestions from both groups are possible, it is just a matter of which one is the most cost effective. It is possible to mix and match suggestions to produce hybrids of the various plans.

The earlier articles can be found here HS2 Phase 2 Liverpool,  From Ditton to Lime Street and East of Lymm.  And some more Rail Docs of mine.

Another route idea can be found here.