Well! I did go back mainly for the free WiFi, in the course of this I took in the save the Liverpool Women's Hospital march and rally as well.
First things first the decision about where is best for the hospital should be based on clinical imperatives there are competing factors, pregnancy and birth are not illnesses and should be treated as such, this is the official position but it also can result in emergency admission. The decision should not be a political football for either side of the argument.
The first thing I noticed about the placards was the usual SWP brand and Left Unity, there were the usual SWP salesmen, has anyone ever seen an SWP saleswoman? Given the exodus from the SWP, I think the entire membership was here. Given the some of the reasons for the exodus it makes the SWP presents rather tasteless. See The SWP leadership has turned the party into a sinking ship
While some organisation come to show support the SWP is usually there to gather support and to make itself seem bigger than it is, I doubt the people carrying the SWP brand banners were actually SWP, it just is just more of their attempts to co-opt members.
The March probably contained 1000 or so by the time they turned up at the entrance to the dock estate, that number quickly dropped off as the speakers began, the only one I recognised was Diane Abbot, though Tony Mulhearn was also there and the I think Lesley Mahmood, who is one of the founders of the group, both ex-Militant, Richard Branson and Tony Blair came in for particular treatment, which you would think was a bit strange, given that neither has anything to do with the hospital or the NHS these days, and the Blair/Brown governments did massively increase funding for the NHS. In short, it had descended into rather typical Corbynite/SWP territory. So basically your average every day hijacking of a good cause. If you are holding a rally do the sensible thing and ban SWP placards, they are claiming that you support them, they are not supporting you.
I did have another look around the conference and yet again saw both Dennis Skinner and Marie Le Conte, still wearing those bloody shoes, the only addition to my I Spy book of MPs was Hilary Benn. The Conference seemed to be hiding in the woods. 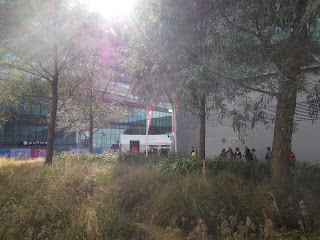 I missed going to the meeting of the Continuity Labour party, with Hilary Benn, because I didn't know it was happening but the Fabian wings meeting spilt onto the street.