Of all the fuck witted and stupid things the UK voting public has done over the years, this is by far the most stupid. The arguments articulated by the leaders of the #Brexits campaign where grossly inaccurate and totally non-convincing, however, they are not why the people voted they way the did. They voted to punish David Cameron and the London elite, without a single thought of what the consequences might be.
It is not the first time the people of this island have done such a thing, when in the last general election, some of the Scots voters decided to punish Labour for sharing a platform with the Tories, that was up there as well. For that we got a more powerful Tory government, this vote of protest will let in some of the even nastier parts of the Tory party, it will drive Scotland away, ensuring decades of Tory majorities, who with their power base in the south of England will continue to pour cash into that area. 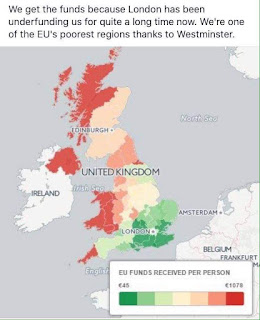 The EU for all its faults gave the money where it was most needed, this mob will not. Congratulate yourselves on giving David Cameron a bloody nose, all you had to do was rip off your own arm and smash him in the face with the soggy end and then punch him with the other hand till you got a contusion fracture. He will pop down to A&E and then spend some time at home convalescing with his millions, before a good long holiday and then making some more millions. You'll be trying to live on a shrinking amount of disability pay and perhaps scrounge of your equally impoverished kids.

Email ThisBlogThis!Share to TwitterShare to FacebookShare to Pinterest
Labels: brexit